The Music of Kishori Amonkar: a divine intervention


One of the legends that has over the years engrained itself as part of Indian music culture and its rich heritage is that of Emperor Akbar and his court musician Mian Tansen. For centuries together children of almost every generation have grown up listening to stories about this great singer. Such was his command over music that his renditions of certain ragas would lit lamps or bring rain. Although it is difficult to separate the fact from fiction, these stories did make an impression on my mind as a child. Years later I came across another one and this in many ways helped me understand the subtlety as well as the magnanimity of Indian classical music. This story had three characters, Emperor Akbar, Mian Tansen and his guru Swami Haridas.

For those of who don’t know about this story; Emperor Akbar once wondered if his favorite musician Tansen can sing so well, how much better would his guru’s music be. He insisted on listening to Swami Haridas and out of no choice Tansen relented. But only on a condition that they both will travel to Swamiji’s ashram and listen to him during his riyaaz. A few days later, when both of them heard Swamiji in his riyaaz, Akbar was so enthralled that he went speechless. On the way back from the ashram, Akbar had another question for Tansen; despite the fact that I love your music, why is it so that your music is so different than your guru’s? To this he replied saying, the answer is quite simple; I perform for you, but my guru performs for no one but the divine. And that makes all the difference. 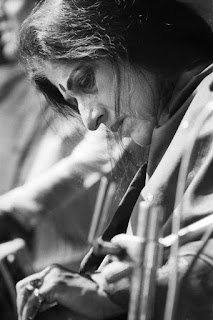 I suppose this is exactly what sets apart the music of Gaan Saraswati Kishori Amonkar. Throughout her life, she refused to play to the gallery and her music continued to grow more intuitive and inwards, almost like she was in a constant dialogue with the divine. And as an audience if one got a glimpse of it, it is to be treasured for the rest of the life.

I have been lucky to have met her, spoken with her and be in her presence at a few occasions if not many. For an artist of her stature, everyone who has heard her even once would have an understanding of what made her music so special. For me, her music led us into a state of fanciful imagination and reflective emotions. This brief note is about how I perceive her music purely from a standpoint of a listener.

Many of you would have attended her live concerts, and if you would recall she always insisted on performing the first rendition as per her wish. After that she would be open to accept requests, if any from listeners or organisers. I was listening to a live concert recording of hers on YouTube recently, and she’s heard talking to the audience saying although the performer before her had presented raga yaman, she would also be rendering the same raga as that is what is in her heart right now and she has to express it. Such was her sincerity that no conventions were ever important to her than to follow her heart.

As a performer she strived to get to the root of the emotion of the raga itself, to create an atmosphere through her music to touch the inner soul, the divine. Now while music is universal, the meaning of music is not. The meaning of music differs from person to person and it largely depends on the way one perceives it. Kishoritai helped bridge this gap. Her music was so finely blended with emotions, that most often her listeners were not listening to say raga yaman but to the feeling (bhava) that is raga yaman. No wonder then Tai’s mehfils have been only one of its kind, leaving the audiences spellbound for days even. 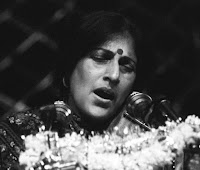 The mahaul she created with each of her renditions was in the making even before she would start singing. Because a bhaav is a combined effect of swar, laya, taal, raga and bandish. As a listener in the audience, I have always been in awe of her attention to detail to all the possible aesthetics accompanying the swar. For instance her baithak with the accompanying artists on stage. Her tanpuras would be placed exactly equidistant at an arm’s length, pointing precisely at the same angle from her. And the tabla, violin and harmonium players would be sitting perfectly to complete the semi circle. For all these long years, although she had performed with many accompanists this setting would never change. The stage always appeared as a complete picture, there was nothing that was out of sync; thus nothing at all to distract the listener from soaking in the pure notes of music. 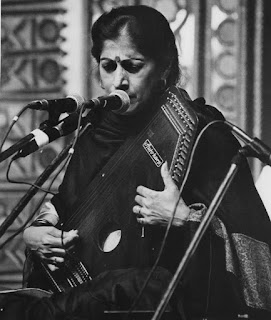 Since her demise last week, many artists, her contemporaries and disciples among them, musicologists, renowned individuals from different fields have penned down their memories and how they interpreted the music and the personality of Kishori Amonkar. It is fascinating to see just how her music, unblemished from any forms of non-classical or popular cultural influence has touched such a wide audience transcending vocations as well as generations. It is a consolation that in the harried times of today, we had a musician like her amongst us whose renditions brought upon calm and peace. As the years will go by, we the listeners would be considered lucky as Emperor Akbar even to have lived in the times of great music.
Posted by Aditya Parwatkar at 8:58 PM No comments: