In life, there are incidents that you don't want to forget and then there are incidents etched in your memory so vividly that every time you reflect upon them, they come out as fresh as you had remembered them to be. You grow with it, and as you do its memory opens up newer perspectives, dimensions, thoughts that had not crossed your mind yet. So the same incident gets an all-new meaning in your head; only until you remember it again. Nostalgia is such a spiral, but talking about incidents that have left lasting impressions on my memory, I remember many many years ago that one late afternoon when my dad's friend Bal Deshpande had visited our home.

As an unwritten law, be it any time of the day we would always have some music playing in the background at home; the naad of the electronic tanpura at the least. Dad maintained it gave a certain continuity to your thoughts. But that day, our home was reverberating a little too loudly compared to the other days as my dad had bought me a cassette of Trilok Gurtu's brand new album African Fantasy. Excited obviously, I had been playing it on the loop from the time it was gifted to me. And I was in no mood to switch the cassette player off once the guests arrived. As a fair gesture, when the doorbell rang I voluntarily turned the volume down by half.

Now I will tell you why are all these details so important to the incident. Dinki Puriya is one of the tracks on African Fantasy, and as it started playing in the background both my dad's and Bal kaka's face lit up. Grabbing the moment, I pumped up the volume. Dinki Puriya is a beautiful acoustic track, packed with zesty sitar and powerful tabla accompaniment. Towards the end of the composition, Bal kaka started mentioning that it was such a treat these days to listen to ragas like these. Until then, I had not known that dinki puriya is actually a raga. Well, that was the smaller of the two revelations I experienced that day. 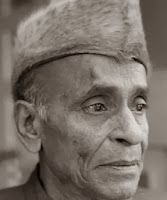 As they continued discussing about rare complex ragas and artists who performed these with utmost finesse, Bal kaka said 'he neither had an imposing voice nor a grandiose stage personality but what a rare gem of an artist he was!' I had not heard about this artist until then, so asked dad to suggest a few recordings that I can listen to. Out of the many albums he pointed out, I selected raga bhimpalasi and once it started playing; a new world opened up in front of me. I discovered something new that day, the best kept secret of Hindustani Classical Music was now upon me. And that's how I was introduced to the music of Mallikarjun Mansur.

Of the many felicitations attributed to him like the doyen of Hindustani Shastriya Sangeet or the last of the purists; Mallikarjun Mansur was an artist, truly one of its kind. A towering personality, that was a sublime combination of humility and eminence. Born in 1910 in a village named Mansur near Dharwad in Karnataka, Mallikarjun went on to become one of the most celebrated singers of Hindustani Classical Music. His story is that of a genius who chose to live his life as a sadhak (disciple) of music. 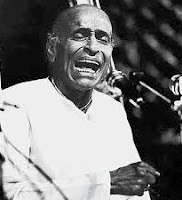 Since the age of ten, stage has been Mallikarjun's best companion. Starting as an actor-singer in musical plays in Karnataka, he soon gained popularity and built a repertoire of khayal, natyasangeet and bhajans. He had his first commercial release in 1933 and thus the ball had been set rolling. But the journey was not an easy one and the main reason for this was that until 60, Mallikarjun spent his life fulfilling commitments with All India Radio and HMV in Dharwad. Thus he was unable to create a following of national stature in the prime of his life through concert performances and tours across the country. But thanks to his disciplined lifestyle, he went on to perform for over 20 long years post his retirement. During this phase, not even once had anyone a slightest doubt of he being physically unfit to perform.

In my view, 'the meeting of the two oceans' is an analogy that best descrbes the music of Mallikarjun Mansur - his gayaki represented two gharanas, Gwalior and Jaipur Atrauli. And it was through this amalgamation that he carved out a style, so beautiful, complex yet intrinsically delicate that can be called only his. Although trained under these two gharanas, his true musical identity blossomed under the tutelage of three gurus - Neelkanthbuwa Alurmath (Gwalior Gharana), Manji Khan and Burji Khan (sons and disciples of Alladiya Khansaheb, founder of Jaipur-Atrauli Gharana). His reverence for his three gurus has been paramount in his life. He regarded them as perennial rivers of music that he could not draw enough from.

While studying under Manji Khan, Mansur honed his technique to visualise the raga where each sur (note) seamlessly blends into the other, and while doing so how one can change the tempo within the same time cycle - making the raga, tala and laya a single unified body. As was the practice in a typical Gurukul parampara, a single raga was taught over days but every time it assumed a new form; this gave Mansur the impetus to think, ponder, debate over each composition and what emotions does it stir; thus understanding how the same raga with the same set of notes performed at different times can emit different feelings. It was during this apprenticeship that he mastered the Dhrupad-based style of Alladiya Khansaheb and built a wide repertoire of ragas including some rare and complex compositions, the unique characteristic of the gharana. Even at forty, Mansur frequently visited Kolhapur to continue his music lessons until Burji Khan passed away in 1950. In his autobiography Nanna Rasayatre, Mansur talks very candidly about his gurus saying that they continue to guide and inspire him in spirit, enabling him to understand the true meaning of music. Not surprisingly then, he had dedicated his success and the reputation he had gained to his gurus.

When you listen to Mallikarjun Mansur, there is an unmistakable string of authority and beauty in each performance; then be it raga yaman or a twin raga like basanti kedar or a complex one like khat. He would often cast a spell on his audiences with the purity of each note and the virtuosity to stitch together varied emotions of the bandish (lyrics) and thus revealing the individual beauty of each raga. Some say, he brought along a special intensity to his singing, an urgency and earnestness in the treatment of the melody. As admired for his Khayal renditions, Mansur was also notably popular for Natyasangeet and Bhajans in Kannada and Marathi both. Musicologists maintain that the one feature that stands out most uniquely in Mansur's style is the way his compositions grip the audience almost instantaneously. With no slow build-up in the form of an alap, the composition directly jumps to the bandish with the accompaniment of tabla. And this direct, dramatic feature of the performance helps establish a rapport with the listeners immediately.

He was indeed a musical phenomenon and they say he didn't stop performing until his last day. He passed away in 1992 and thus an era came to an end. He was conferred with many titles and awards including Padma Vibhushan, Kalidas Sanman, Karnataka State Sangeet Academy Award and many others although no award would match his selfless service to music. There would be no one like him again but his music will surely continue to inspire scores of Hindustani Classical music lovers for years to come.

Posted by Aditya Parwatkar at 3:26 AM