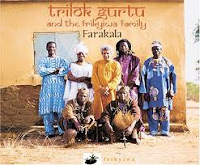 When released in May 2006, this was a much awaited album from Trilok Gurtu. Farakala is a complete new breeze in Trilok’s signature style of music. Recorded over 2 sessions in Mali, a village in West Africa, these recordings have such a raw feel that it seems the musicians are performing in your backyard. No fade-in, fade-outs, no turn tables... just pure sounds from an ethnic village. African vocals are haunting and Trilok sounds rejuvenated with some of the now-rarely-heard African drums.

Trilok had shared the unedited dvd recordings of the making of Farakala, and it was a treat to watch. The first thought to have crossed my head was that a Time Warp where amidst a dusty village, villagers clad in tribal attire, old huts with thatched roofs, dried land were a bunch of musicians in t-shirts and jeans armed with an apple G4, a bundle of wires and cables complete with Sennheiser headphones and mics.

Posted by Aditya Parwatkar at 8:50 PM