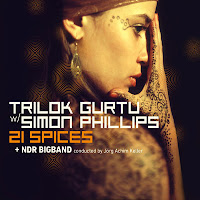 In collaboration with London-based rock drummer Simon Phillips and Germany’s very own NDR Big Band, 21 Spices is the latest offering from the Bombay-bred musical virtuoso Trilok Gurtu. Easily seen as the meeting of two maestros from the world of percussion, this album is a unique concoction of heady rhythms, raw sounds of drums and tabla and the opulence of a philharmonic orchestra.

Premiered at the Drums'n'Percussion Festival in Paderborn in May 2010, it is a mix of live recordings and studio tracks which all have been featured on Trilok’s earlier albums. Named after the number of musicians involved in the making of the album, 21 Spices is Trilok's second album after Bad Habits Die Hard (released in 1995) which has been recorded and produced live. Incidentally, 21 Spices was one of the tracks that appeared on BHDH.

Quietly rightly known as a serial collaborator, Trilok has managed to blend his music with various musical styles from various parts of the world. Post the release of The Beat of Love (2001), Trilok developed a distinctive style of his own where he initiated collaborations with artists from a range of musical genres from Robert Miles to ASQ to the Frikyiwa Family to Jan Garbarek and more. Some also maintain that Gurtu has come of age in the new millennium. How much ever truth that may hold, no one’s complaining for sure.

If we have to compare the sound of this album, then Trilok’s collaboration in 2006 with Arke String Quartet on Arkeology comes the closest. Have a listen, the album does carry certain freshness into the room and deserves tapping a foot or two.

Posted by Aditya Parwatkar at 1:59 PM