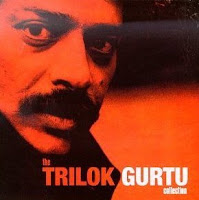 If you check with Wikipedia, they say Trilok Gurtu is an Indian percussionist and composer, whose work has blended the music of his homeland with jazz fusion, world music and other genres.

He has released his own albums and has collaborated with many artists including Terje Rydpal, Gary Moore, John McLaughlin, Jan Garbarek, Joe Zawinul, Bill Laswell, Maria Joao & Mario Laginha and Robert Miles.

But if you’ve not heard Trilok Gurtu before, then this album could be an ideal one to start with. Compiled from 6 of his albums prior to Kathak (1998), the TG Collection is a treat listening to with diverse sounds, some mind-blowing rhythms, and new-wave compositions.

The album features artists like Jan Garbarek, Pat Metheny, L Shankar and the thumri queen Shobha Gurtu(Trilok's mother) amongst others. Go ahead, grab this one and indulge yourself in the world of completely different kind of music, the Gurtu kind of music.

Posted by Aditya Parwatkar at 4:21 PM