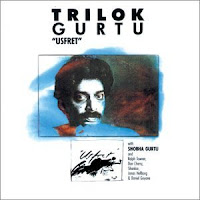 Seriously, what a masterpiece this one is; released way back in 1987 this album still rocks. Lovely alaps(vocals), the mesmeric beats, the soulful compositions... it has all the ingredients of a successful debut album.

Featuring Shobha Gurtu (Trilok's mom), Don Cherry, Ralph Towner, Shankar and Daniel Goyne, this album has paved the path for musicians like Talvin Singh and Nitin Sawhney and the emergence of the UK underground music in the 90s.

The album begins with Shobharock and by the end of this 7 1/2 min track, you know what’s in store for you ahead. Hailed as an album way ahead of its time, Usfret proved to be an inspiration to so many that we can still see its poor imitations. A must buy for all you music lovers, welcome to the land of percussion music.

Posted by Aditya Parwatkar at 4:32 PM